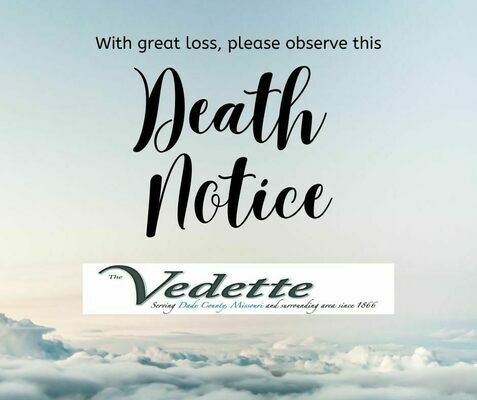 Tyler William Hatfield, age 24, of Kansas City, Missouri, passed away on Thursday, September 29, 2022, in Independence, Missouri. He was born September 18, 1998, in Columbia, Missouri, the son of Johnny Lee and Angela Christine (Rogers) Hatfield. Tyler was a 2017 graduate of Mt. Vernon High School in Mt. Vernon, Missouri and worked as an attendant for a service station and attended Orange Cumberland Presbyterian Church. Tyler is survived by his mother, Angela Hatfield of Aurora, Missouri; his father, Johnny Hatfield of Kansas City, Missouri; one sister, Kaelyn Hatfield of Marionville, Missouri; one brother, Jonathan Hatfield, of Aurora, Missouri; maternal grandparents, Mary and James Smith of Aurora, Missouri; two nephews, Ethan and Felix Parker and aunts, uncles, cousins and other family and friends. Tyler was preceded in death by his maternal grandfather, William Rogers and paternal

grandparents, Bernie, and Mary Aguilera. No services are planned at this time. Arrangements are under the direction of the Crafton-Cantrell Funeral Home, in Aurora, Missouri. Online condolences may be shared at www.CraftonCantrellFuneralHome.com.

Backroads of So Greenfield