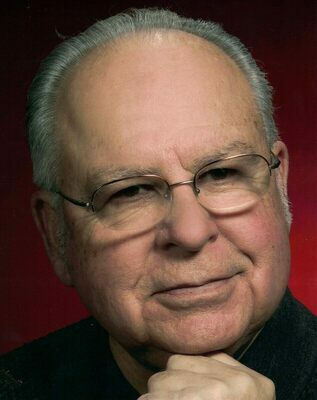 John Calvin Jones, age 88, of Greenfield, Missouri, entered his eternal home on Satruday, October 15, 2022. He was a resident of Lake Stockton Healthcare for the past six months. John was born November 28, 1933, to Emerson and Veda (Vineyard) Jones of Aurora, Missouri. John was the youngest of five children.
He attended elementary and high school in Aurora. He graduated from Missouri School of Mines (Missouri University of Science and Technology) with a degree in electrical engineering. He played football while there and earned a small scholarship to assist with college expenses. After graduation, he went to work for IBM and had a successful career working on the design of computers and in management for 29 years. While working for IBM, he moved with his family to New York, California, Texas, Florida and Paris, France. After retirement he returned to SW Missouri and worked at Kerr Millworks and drove a school bus.

John was a kind, gentle man who loved the Lord and His church. Until his health began to decline, he was an active member of Main Street Baptist Church serving as church trustee, on the building committee of the new church, taught Sunday School, drove the church bus and assisted where needed. He was involved in the community and a former member of the Men’s Civic Club. He enjoyed the Tuesday men’s golf league. He and his good friend, Harold McMasters, taught golf lessons to local youth. He served on the board of the Dade County Senior Center.

He loved listening to old hymns, good food, watching football on TV, planning trips and traveling with his wife Vickie. They traveled extensively as long as his health allowed. He loved Dr. Pepper. The staff at the healthcare facility were so good to make sure he had his daily Dr. Pepper. In younger years, he made hunting and fishing trips with his son, John, Jr.

Funeral services will be held at 11 a.m. on Friday, October 21, 2022, at Main Street Baptist Church. Burial will follow in Pleasant Grove Cemetery. The family will receive friends on Friday morning at 10 a.m. until service time at the church. In lieu of flowers, memorial contributions may be made to the Pleasant Grove Cemetery. Online condolences may be shared at www.greenfieldfuneralchapel.com. Services are under the care of Greenfield Funeral Chapel.