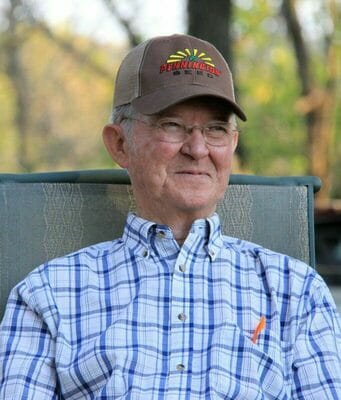 Carl Allen Grider, age 83, of Greenfield, Missouri, passed away on Thursday, October 13, 2022 in his home surrounded by family. He was born January 16, 1939 to John and Edna (Everett) Grider and was the youngest of their five children.

Carl was a 1957 graduate of Greenfield High School. After graduating, he went to work in Kansas City for a short while where he decided that the city life was not for him. He returned to Greenfield and worked at Greenfield Lumber Company in 1957 as an assistant manager. In 1971, he went to work as a telephone technician for Contel/GTE Phone Company for 22 years and retired in 1993.

On August 8, 1959, he was united in marriage to the love of his life, Darlene Sorden, of Lockwood, Missouri. The Lord blessed them with 63 wonderful years together, living all their married life in Greenfield, Missouri. They were also blessed with two sons, Roger Lynn and Greg Allen. His sons were so special to him and each of them carry on some of his best characteristics.

Carl enjoyed nature, making walking sticks, camping and traveling with family and their special friends, “The Couples.” He was so proud of his family and loved them so very much.
At family gatherings, before blessing the meal, he would often look at Darlene and joke about how it was their fault we were all there. He loved dessert and would often ask for a little of everything. He gave the best hugs and hand squeezes and had a calming presence that will be missed tremendously.

Carl was saved at an early age at Mt. Olive Christian Church. In 1969, he became a member of the First Christian Church in Greenfield. His love for the church meant a great deal to him. He was a faithful attendant and served as Board Chairman, Property Chairman, Trustee and as an Elder through the years.

Carl also felt very blessed to have had the opportunity to spread the gospel by singing southern gospel music with the New Disciples Quartet for 30 years. Most Sunday evenings were spent sitting around a card table in his home with the quartet practicing or singing out. They were privileged to travel and sing at hundreds of events and churches over their career. The songs of the New Disciples Quartet are known by Carl’s family and friends and the peace that listening to their recordings and hearing his smooth baritone voice brings is immeasurable.