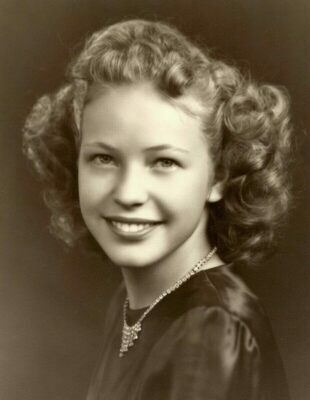 Bonny Lee (Daniel) Douglas, of Lockwood, Missouri, departed this life on Monday, September 19, 2022, in the Good Shepherd Nursing Home at the age of 89. Preceding her in death were her parents, Adrian and Clara (Polston) Daniel and husband, Roy Douglas.

With her ready smile and contagious laugh, if you met Bonny, you were lucky. Easy to talk to and quick to tease, Bonny was born November 19, 1932, in the farming village of Lockwood, Missouri. She spent her early childhood moving among Midwest oil fields where her father worked until killed in an auto accident when she was seven. Her mother was seriously injured in that same accident but survived. It was here Bonny’s resilient nature became evident. No matter what hardship she encountered, as a child or adult, Bonny faced it bravely and with positivity. She liked to say her blood type proved it. She was B+, “Be Positive.”

After her father’s death, Bonny, her mother, and sister, Ima Jean (Daniel) Theurer returned to Lockwood where she grew up a tomboy watching her favorite cowboy stars at Saturday matinees, building pretend saloons with stick horses and poke berry wine, mowing lawns, riding horses, and driving her lady-like older sister crazy. However, she matured into a fashionable young lady becoming May Day Queen and cheerleader. She worked at the hardware store and as a telephone operator before graduating from Lockwood High School in 1950.

She then moved to Midland, Texas, to live with her aunt and uncle, Guy and Ruby (Polston) Mabee. It was there she met her husband, Roy, home on leave from the Navy. Roy was a friend of her cousin, Joe Mabee. When Roy came over for a “friendly” game of croquet, Bonny beat both him and Joe. She crowed about it, and despite her teasing, or perhaps because of it, Roy was smitten. They were married soon after in 1953 then moved to southern California while Roy finished his service. Their next stop was Texas A&M University where Roy earned a bachelor’s degree and Bonny worked as a secretary. Roy told Bonny if she worked the four years while he was in college, he would work the next 60. She thought that was a good deal.

Moving to Salt Lake City, Utah, upon graduation, their daughter Amy was born in 1958. The little family then moved to Ft. Worth, Alvarado and Belton, Texas. Their second daughter, Nancy, and son, Jake were born in Belton in 1963 and ‘65 respectively. After a quick move to Midland, the family settled in Palestine, Texas where they stayed until their children were grown. They then moved to Fallon, Nevada, to be near grandchildren. When their grandchildren were grown, they moved to Carthage, Missouri, to be near Bonny’s sister.

When Roy developed Alzheimer’s, the couple moved to San Francisco, Caalifornia, to live with Nancy, then to the Good Shepherd Residential Care Facility in Lockwood. Bonny cared for Roy through Alzheimer’s until his death in 2021 just as she had his mother, Inez, when they lived in Palestine.

A born competitor, Bonny loved playing tennis. Her son-in-law, Chet, who was 6’2” to her 5’2” frame, and 25 years younger, found her a respectable rival. “She’s like a ball return machine. She never misses.” Wherever she lived, rural Missouri, small town Texas or sophisticated San Francisco, it didn’t matter, Bonny’s loving spirit and fun-loving ways were always game, set, match.

Known as “Granny” to her grandchildren and great-grandchildren, she relished the role, and her grandchildren loved their adventures with her and the loving example she set. When her own daughter became a grandparent, she was not allowed to use the same title of endearment because as her children explained, “There is only one Granny.”

Hers was a life well lived, full of nurturing others, fun and adventure. Bonny was never alone as her positive nature attracted friends and kept family close. This Lockwood sweetheart is off again to share smiles and play mischief in the great beyond--an unforgettable spirit living forever in the hearts of those lucky enough to know her.

Memorial services will be held on her 90th birthday, Saturday, November 19, 2022 in Lockwood, Missouri. In lieu of flowers, donate in her memory to your local blood bank or to Good Shepherd Community Care & Rehabilitation, 200 W. 12th St., Lockwood, MO 65682, 417.232-4571.
Online condolences may be shared at www.greenfieldfuneralchapel.com. Cremation services were under the care of Lockwood Funeral Chapel.