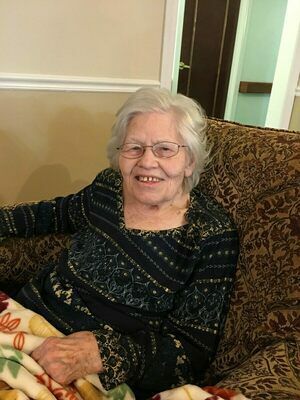 Milda (Fry) Sconce was born November 14, 1921, to George and Tena Fry at their home at The Junction of Jacks Fork and Current Rivers outside of Eminence, Missouri. She departed this life on May 1, 2022, at Summit Villa in Holts Summit, Missouri, at the age of 100 years and 5 ½ months. Throughout her life, she was known as “Biddy” to family and friends.
Milda grew up at The Junction and attended Eminence High School, graduating in May 1939.
On September 14, 1940, Milda was united in marriage to Raymond Sconce. To this union three children were born, Wendell, Marlyn, and Margaret Ann. They lived in Eminence, Missouri, and Madison, Illinois, then moved back to Eminence when Raymond was drafted into the army to serve in Europe in WWII.

While in Europe, Raymond felt God’s call on his life to serve in ministry of the Gospel. At the same time, Milda accepted Jesus as her Savior and was baptized in Jacks Fork River.

Raymond was honorably discharged from the army after being wounded in action.

After he returned, he entered Southern Baptist College at Walnut Ridge, Arkansas, and Milda also took some classes at the college. While there, Milda got her first taste of being a pastor’s wife as Raymond pastored small churches in southern Missouri.

From Walnut Ridge, they moved to Marshall, Texas, where Raymond studied at East Texas Baptist College. Upon his graduation in May 1950, the family moved back to Eminence, where Raymond was called to serve as pastor of Eminence First Baptist Church.
The family moved several times during the next years, with Raymond serving as pastor or Director of Missions in Salem, Wheaton, Hartville, Irondale, and Lockwood.

Through those years, Milda enjoyed her role as the wife of a minister. She taught Sunday School classes, VBS classes, and loved working in summer camps with children and youth.

When Raymond retired, they moved back to Eminence and enjoyed living near their siblings again. Raymond “un-retired” to serve as pastor of Fremont Baptist church until his health began to decline. Following his death in October 2002, Milda continued to live in Eminence. In 2014, Milda’s health began to decline, and she moved to Summit Villa Assisted Living in Holts Summit, where she enjoyed the activities and making new friends.

She is survived by one sister-in-law, Wandalea Sconce; many nieces and nephews; and a host of friends. She will be missed by all who knew her.

Haas Appointed Mayor in Miller by Vote of Board...