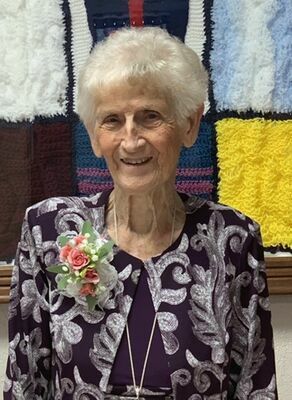 Leta Nadine Hughes, of the Pennsboro community south of Greenfield, Missouri, departed this life at the age of 92. She was called to be with her Lord and Savior on Tuesday, December 21, 2021, at the Butler Center with her loving family by her side.

Graveside services will be held at 11 a.m. on Monday, December 27 at the Pennsboro Cemetery. Family and friends are welcome to view and pay their respects on Sunday, December 26, 2021 from noon until 4 p.m. at the Greenfield Funeral Chapel. Due to current COVID 19 restrictions, please be mindful of maintaining a social distance. Also, you are welcome to and, indeed, encouraged to wear face masks to protect yourself and others.

Nadine was born at her family’s home near Pennsboro, Missouri, on June 16, 1929 to John Homer and Myrtle Vesta Allison Batten. She was raised on the family farm, attended elementary school at Mound School north of the family home and graduated eighth grade at the Pennsboro School. Nadine entered Greenfield High in 1943 where she graduated with the class of 1947. After graduation, she attended SMS in Springfield, Missouri, majoring in business and accounting. It was here that Dwain and Nadine began dating and their love story began.

Nadine married the love of her life, Herschel Dwain Hughes, at her parent’s home in Pennsboro on March 4, 1950. To this union, two daughters, Marcia and Linda, were born. Dwain and Nadine lived their entire married life, of over 71 years, on their Missouri Century Farm. Nadine was a loving wife, mother, and grandma. Nadine’s pride and joy was always her family.

Nadine was baptized and accepted Jesus as her Lord and Savior at a young age and attended Patton’s Chapel with her parents until she and Dwain were married. Her faith was very important to her and she nurtured the love of Jesus in her children and grandchildren.

As an active member of the First Christian Church of Greenfield for nearly 70 years, she served faithfully as church treasurer, memorial fund treasurer, and was on various committees. Nadine had a love of music and sang in the church choir almost her entire life. She also was a member of the Friends of Music choral group for years and performed at various church and community events.
Nadine took pride in her community and was an active member of the Farmerettes Extension Club for over 50 years.
To support the Pennsboro community’s youth and her children’s involvement in 4-H, she served as a club and project leader. She took an active interest and remained connected to the youth in her church, school and community throughout her life.
Nadine loved her role as a supportive farm wife, mother, and homemaker. You would often find her out on the farm taking food to the fields, helping out in the dairy, driving tractors, and checking cows with Dwain. She took pride in making clothes for her daughters and even though she worked all day outside the home, she would often be found staying up into the wee hours of the night sewing dresses for Marcia and Linda to wear to school the next day. She was a full time mom and farm wife until she entered the work force in 1956. She was a dedicated and valued employee for over 40 years at MFA Feed & Grocery and later Citizens Home Bank.
Nadine was a very strong willed, independent, honest and hardworking woman. She was ahead of her time working outside of the home and made many sacrifices for her family. She took pride in her career as a bookkeeper and accountant and was thorough, meticulous and precise going over and beyond what was expected. She had an outstanding work ethic that she passed down to her children and grandchildren.

Through the years you always saw Nadine and Dwain together. They enjoyed bowling, playing cards, attending sporting events, traveling, water skiing, going to the lake, and spending time with family and friends. Nadine was such a sports enthusiast. She would often have two TVs and the radio on watching and listening to three different games at once. She was a huge St Louis Cardinals fan and always knew where they stood in the rankings. She and Dwain were big MSU mens’ basketball supporters holding season tickets for years.

Because of her love of her family and sports she rarely missed a child’s or grandchild’s sporting or music event. She was their biggest fan and traveled miles to support their endeavors. She loved sports and didn’t care if it was a t-ball game or the state championship she wanted to be there. She was even able to attend her great grandsons’ football game this fall at age 92. If she couldn’t attend she wanted to watch or listen and called to check incessantly to find out the score and what was going on.

Her family was just everything to her. She was so proud of her children and grandchildren; and as the years passed and the great-grands came along, she was happiest when she and Dwain could spend time with their family and share in their lives.

Nadine will be sadly missed by her family and friends; yet she will live on in the lives of those she touched. It is such a comfort to know that she is resting peacefully in the arms of her Savior; and reunited with her loving husband, daughter and all her family and friends who went before her in the faith.
Nadine was preceded in death by her parents, Homer and Myrtle Batten; her father and mother-in-law, Noel and Marie Hughes; her brothers and sisters: Evelyn (Richard) Shaw; Vesta (Harold) Brake; Wesley (Dorthy) Batten; Louanna (Don) Sarver; James (Marjorie) Batten; John Batten; and brother-in-law Howard Suttee; her brothers- and sisters-in-laws: Johnson and Betty Hughes; Sue and Roy Carter; and her youngest daughter, Linda Hughes Andrews. Nadine sadly lost her husband, the love of her life, Dwain Hughes on April 11, 2021.
Survivors include her sister-in-law, Marilyn Batten of Overland Park, Kansas; daughter, Marcia Rader and husband, Randy of Butler, Missouri; son-in-law, David Andrews of Branson; grandson, Eric Andrews and wife, Brooke, of Benton, Arkansas; granddaughter, Kristen Diehl and husband, Trent, of Butler, Missouri; granddaughter, Kellie Davidson and husband, Michael, of Butler, Missouri; grandson, Colby Andrews and wife, Heather, of Mesa, Arizona; great-grandchildren: Tanner Diehl, Mason Diehl, Dylan Davidson, Lucas Davidson, Cooper Andrews, Camden Davidson, Gavin Andrews, and Karsyn Davidson; and a host of nieces, nephews, and friends.
In lieu of flowers, memorial contributions may be made to the First Christian Church of Greenfield or Pennsboro Cemetery. Services are under the care of Greenfield Funeral Chapel.

County Intends to Fill Vacancy Left by OACAC Of...