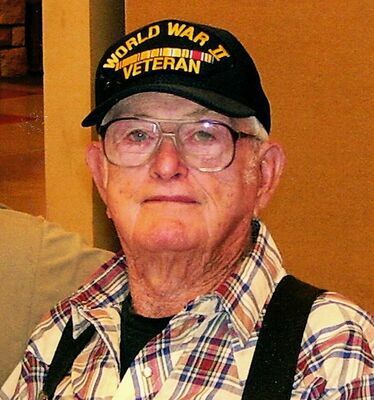 G.D. Myers, of South Greenfield, Missouri, departed this life on Monday, December 20, 2021, in the Good Shepherd Nursing Home at the age of 95 years and nine months.

He was born on March 15, 1926 at his parent’s home in South Greenfield, Missouri to Charles A. and Cora M. Myers. G.D. was the oldest of seven children.
He spent his childhood in and around South Greenfield hunting, fishing, and riding horses. G.D. attended the South Greenfield Elementary then graduated from Greenfield High School.

He entered the military in 1944 at Camp Robinson in Arkansas. G.D. served with the 9th Infantry during WWII in Europe and Germany as a Bazooka Specialist.

After the military, he followed his family tradition and became a Brick Mason, a job he worked at for the rest of his working life. Many large buildings in Springfield, Joplin, and Kansas City, Missouri, were built by him and his family. Lots of homes in Dade County were bricked by the Myers family. G.D. designed and then helped build the Veterans Memorial on the Greenfield Square with the rest of the Myers family.

He loved to hunt and fish, catching crappie was his favorite. G.D. looked for and collected Indian arrowheads all over Dade County. He was probably one of the most talented, natural artist in this part of the country, always drawing even during WWII for the military. He entertained job offers everywhere even from Walt Disney. G.D. loved telling stories to the next generation about the war, travelling, etc. On occasion even stretching the truth a little.