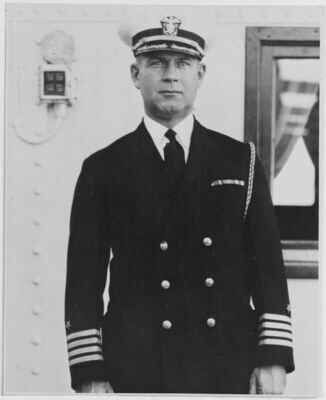 Rear Adm. Isaac Kidd was aboard the USS Arizona the morning of Dec. 7, 1941, when the military facilities at Pearl Harbor were attacked by Japanese forces. Kidd’s remains were never found following the explosion that sunk the Arizona – to this day, he is considered missing in action. (U.S. Navy photograph) 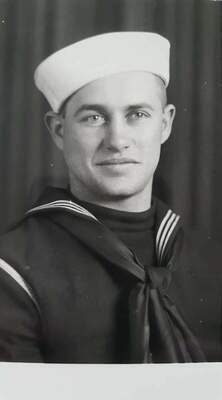 Missouri-native Ralph McNary was a sailor aboard the USS Oklahoma at the time of the Dec. 7 attack on Pearl Harbor. He survived the capsizing and sinking of that ship, making his way to the USS Maryland and assisting the crew of that ship in the fight. McNary served out the war in the Pacific and went on to retire from the U.S. Navy in 1961. (McNary family collection) 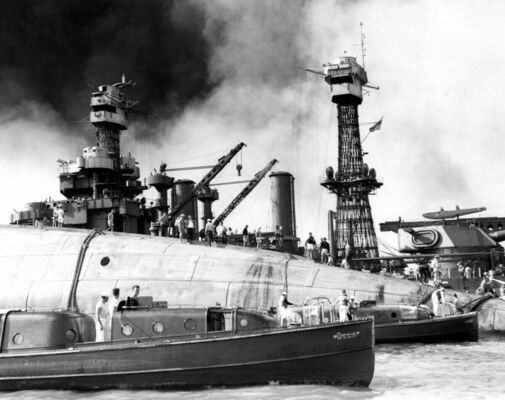 The capsized USS Oklahoma, with USS Maryland visible behind, during the Dec. 7, 1941 attack. (U.S. Navy photograph) 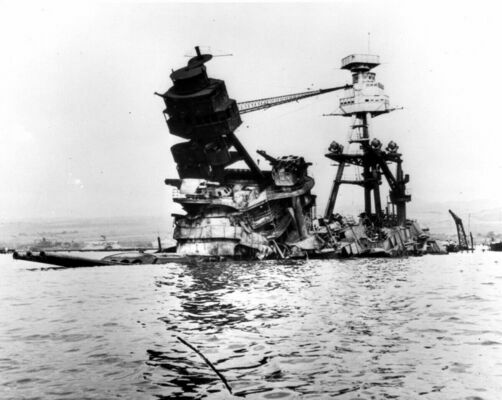 The wreck of the USS Arizona, after fires aboard were extinguished several days after the Dec. 7 attack. (U.S. Navy photograph)
Previous Next

Next Tuesday, Dec. 7, will mark the passage of eight decades since the “date which will live in infamy,” as Franklin D. Roosevelt described the events of Sunday, Dec. 7, 1941, when naval and air forces of Imperial Japan attacked the United States military installations at Pearl Harbor in Honolulu, Hawaii, dragging the United States of America directly into World War II.

A number of area residents have direct connections to the events of that day, including Extension Specialist Bob McNary, whose father survived the sinking of the USS Oklahoma, and local businessman Jack Pugh – who retired from the U.S. Navy with the rank of captain and served under the son of the most senior officer to lose his life that day.

As McNary tells the story, his father, Ralph McNary, a sailor aboard the Oklahoma, was on deck eating an apple when he first heard the drone of the planes. It was about 7:50 a.m.

“Dad always said that he swallowed the apple whole when he realized the planes were Japanese,” said McNary.

Meanwhile, farther forward in Battleship Row, Rear Admiral Isaac Kidd was aboard the USS Arizona, which served as his flagship while serving as commander of Battleship Division One. The ranking officer aboard the ship, Adm. Kidd rushed to the bridge when he became aware of the attack, as he was the senior officer present afloat.

Aboard the Oklahoma, McNary would have noticed the ship beginning to list to the port side as torpedoes launched from Japanese aircraft struck amidships, below the waterline. The first two torpedoes struck between 7:50 and 7:53 a.m., causing external damage and destroying a large portion of the ship’s anti-torpedo “bulge” armor; a third, striking the same spot at about 8 a.m., penetrated the hull, damaging fuel storage bunkers and various bulkheads.

On the Arizona, Adm. Kidd would have just been reaching the bridge as the first Japanese bombs struck the ship, at about 8 a.m. Three bombs in quick succession hit aft and amidships to port, causing minor damage and starting a fire in the captain’s pantry. At about 8:06 a.m., the fourth bomb struck near Turret II, farther forward of the other strikes. The bomb pierced the armored deck near the forward magazines (ammunition storage areas), and about seven seconds after impact, the ship was rocked by a terrific explosion.

It is unclear to this day why the magazines on the Arizona exploded as they did; naval investigators hypothesized that a hatch might have been left open, or that the bomb detonated black powder used for ceremonial salutes and seaplane launch catapults which in turn set off the harder to detonate smokeless powder. The answer will likely never be known, as not enough of the forward part of the ship survived the attack.

Most of the blast force from the explosion was expelled through the sides of the ship, destroying much of the forward interior and leaving a three-story void into which the forward gun turrets and portions of the superstructure collapsed, pulling the forward tripod mast and the ship’s funnel forward at alarming angles. The force of the blast was so powerful it practically tore the ship in two, and actually extinguished fires that had broken out on the USS Vestal, a repair ship moored alongside the Arizona. Of the 1,512 crewmen aboard at the time of the explosion, 1,177 were killed, including the ship’s captain and Adm. Kidd.

“All they ever found of Admiral Kidd was his Naval Academy ring, which was fused to a bulkhead by the heat of the explosion,” said Pugh.

Meanwhile, the list of the Oklahoma had become so severe that the ship began to capsize. Within 12 minutes, the ship had rolled onto its side, with her masts touching the harbor bottom and her starboard side and portions of her keel now above the waterline. Of the crew, 429 were killed or missing, many trapped below decks as the ship rolled over.

Ralph McNary was among the Oklahoma’s sailors lucky enough to abandon ship and swim to the neighboring USS Maryland, where they joined that ship’s crew in firing her anti-aircraft guns.

“Dad told me that he was glad he didn’t have dentures back then: the lines let down by the Maryland for the men to climb aboard were so slick with oil and grease he said he had to use his teeth to get a hold of one,” said McNary.

After joining the fight aboard the Maryland, McNary volunteered later that day to spend the night crouched in a sugarcane field across the island of Oahu from Pearl Harbor, armed with only a cane knife, to help fight off a rumored Japanese paratroop drop that thankfully didn’t happen. He went on to serve out the war in the Pacific, and served a full 20 years in the U.S. Navy, retiring as a chief petty officer (E-7) and raised to master chief (E-9) in retirement; a number of his exploits have been related by Bob McNary in the pages of this publication.

“To most of us today, World War II in general, and Pearl Harbor in particular, is a historic event and not much more,” said McNary. “Yet we need to recall that this was not just a historic event; it was our historic event, a seminal moment in U.S. history. Because if we do not remember Pearl Harbor, we cannot expect generations to come to remember 9/11. It is a responsibility borne by each new generation to recognize the sacrifice made by the previous ones.”

Adm. Kidd also left a legacy of service, with his son Isaac “Ike” Kidd, Jr., graduating from the U.S. Naval Academy and receiving his commission just days after the attack on Pearl Harbor. The younger Kidd went on to achieve the rank of full admiral, and served as commander-in-chief of the U.S. Atlantic Fleet, as well as the supreme allied commander of NATO forces in the Atlantic theater of operations, in addition to becoming the No. 2 man in the Navy, as described by Pugh, who served under Adm. Kidd and his associate, Capt. John “Jack” Jones, during his own service in the U.S. Navy.

“Ike was the one man I would have wanted to go to war with,” said Pugh.

It’s important that the attack on Pearl Harbor not be forgotten, not just to honor the memory of those who lost their lives that day, but also to prevent another such event in the future, said Pugh.

“I served with the sons and grandsons of the Pearl Harbor generation, and was impressed with their dedication to ensuring it never, ever happens again,” said Pugh. “We must never again allow ourselves to be so unprepared, or so arrogant as some of us were, in our laziness, stupidity or bigotry to believe the Japanese were not capable of such an operation.”

Sen. White on What Redistricting Means for Dade...

Miller R-II’s Storm Up For Award

As 'Shchedryk' or Carol of The Bells, Song Unit...

Haas Appointed Mayor in Miller by Vote of Board...