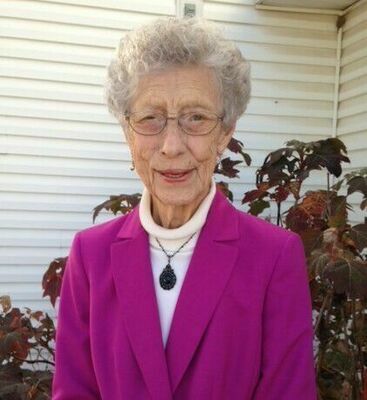 Doris was born on a dairy farm near Freistatt, Missouri, to the late Rudolph and Edna Lampe. She was baptized into Christ on January 22, 1928. She attended Trinity Lutheran School and confirmed her Christian faith on March 29, 1942. She and her brothers and sister grew up milking cows by hand. She graduated from Verona High School in 1946 and worked as a secretary for the L. A. Woods Agency of the Ohio National Life Insurance Company in Springfield from 1946 to 1952.

Doris had no intention to marry a farmer, but when she met Melbert, her plans changed. On June 8, 1952, she was united in marriage to Melbert Lee Schnelle of Lockwood, Missouri. They shared 61 wonderful years together working on their farm. God blessed their marriage with five children.

Doris was a homemaker who enjoyed cooking for family and friends and trying out new recipes. For 20 years she volunteered as a Foods Leader in 4-H. Doris also loved being outside, mowing the yard with her John Deere tractor and growing flowers. Her greatest pleasure was spending time with family. As a faithful member of Immanuel Lutheran Church in Lockwood, she was active in the Lutheran Women’s Missionary League and Braille Workers.

The family would like to express their sincere thanks to Dr. Angie Whitesell for her loving care.

Visitation was at Immanuel Lutheran Church Family Life Center on Friday, November 19, from 4:30 to 7 p.m.

Memorials may be directed to Immanuel Lutheran Church or Immanuel Lutheran Women’s Missionary League.
Online condolences may be shared at www.greenfieldfuneralchapel.com. Services were under the care of Lockwood Funeral Chapel.