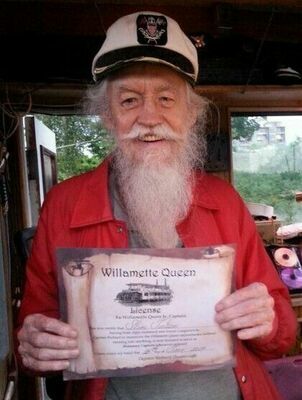 Leo was born on June 25, 1934 in Seybert, Missouri, to Martin Homer and Vida (Hughes) Lollar. He graduated from Greenfield High School in 1952.
Following high school, Leo enlisted in the United States Army, serving with the 82nd Airborne Division until he was Honorably Discharged. Later Leo would move to Oregon, settle and spend his remaining years.
He was a member of Greenfield Cumberland Presbyterian Church.
Leo is survived by three children: Kathryn Lollar-Hooker, Michael Lollar, and Star Kirk; two grandchildren: Wesley Kirk and Zachary Kirk; two great-grandchildren; and one sister, Beth Peeples of Pompano Beach, Florida.

Graveside services were held at 12 p.m. on Saturday, October 16, 2021, in Greenfield Cemetery.
Online condolences may be shared at www.greenfieldfuneralchapel.com. Services were under the care of Greenfield Funeral Chapel.