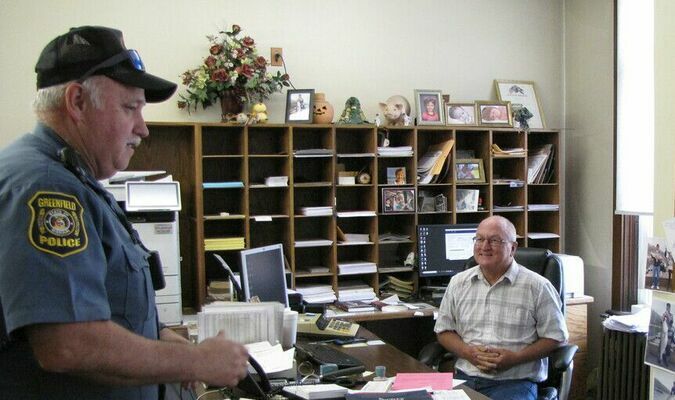 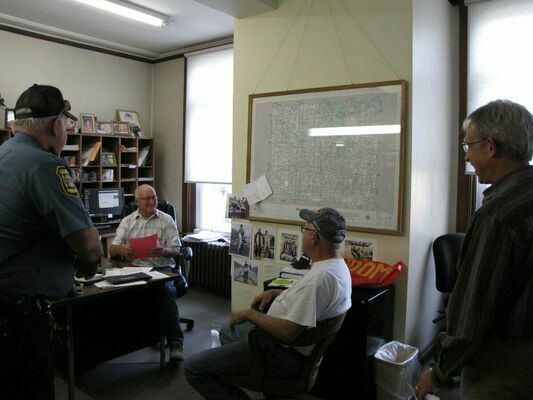 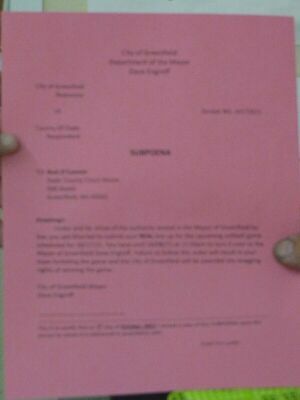 The subpoena presented to Dade County by the city of Greenfield to obtain the county's "real lineup" or risk forfeiture of bragging rights in their upcoming benefit softball game. (Photo by James McNary)
Previous Next

Greenfield city officials including Mayor David Engroff, Police Chief Tim Larkin, and City Clerk Mark Davis made the long journey of several blocks from the City Hall to the Dade County Courthouse on the square in Greenfield on Thursday, Oct. 7, 2021, following rumors that the county might be making some short-term hires to fill out their squad in the City-County Benefit Softball contest.

Larkin presented County Collector Rod O'Connor with a subpoena, informing him that the county had 24 hours to provide the "real line-up," or risk forfeiting the bragging rights to the next game.

The parties also discussed pressing matters such as neutral parties who may serve as umpires, and for which side any "mercy rule" was really being enacted. The opponents agreed to reach out to the Emergency 911 Dispatch Center staff for volunteers to umpire; no agreement was reached regarding who is most in need of the mercy rule.

Staff of the city of Greenfield and Dade County are playing a series of softball games to raise funds to refurbish the "Welcome to Greenfield" signs greeting visitors to town. The signs are maintained by the Greenfield Area Chamber of Commerce.