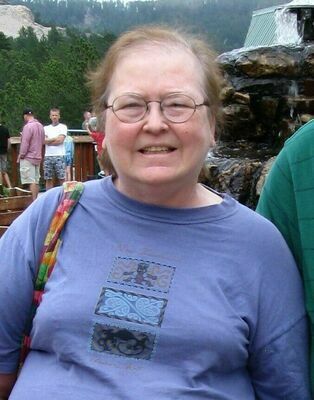 She was born Melinda Susannah Peebles in 1946 in Wichita, Kansas. She was the younger daughter of the late Harry and Phyllis and sister to Carol, who survives.

Growing up, she enjoyed playing ball and attending Girl Scouts events. In high school, she lettered in tennis and badminton, was president of the Spanish Club and was the first student to be twice the editor of the school paper, Westword. She also was involved in the Future Teachers Club, knowing that was the career she wanted from an early age.

She followed her sister to Pittsburg State University, Kansas, where she met Larry Dixon from Heavener, Oklahoma. They married Jan. 20, 1967, at the campus chapel, the day after finals. Their home was the weekly spot for Star Trek Original Series viewing parties.

Melinda graduated with two bachelor’s degrees – history and Spanish. She taught her entire career at Lockwood High School, beginning in the fall of 1968. She earned her master’s degree in guidance and counseling in 1975, attending summer and night classes. Her duties split in 1978 until 2011 -- part-time counselor and part-time Spanish and history teacher. After taking her Spanish class, students were always referred to by their new names.

Melinda was the first Lockwood teacher to be initiated into the Delta Kappa Gamma, women educators sorority, and served as president of the local chapter nearly 20 years. She semi-retired in 2001 and fully after the 2012-13 school year. At that time, the University of Missouri-Columbia Missouri Scholars Academy named her an Outstanding Teacher.

She remained involved, by working the scorer’s table for volleyball games for more than 30 years and donating to various club and school projects, particularly the library.

In 1972, she expanded the school’s Scholar’s Bowl program, which had only been part of a monthly Aurora radio station program “Tournament of Knowledge.” After she and English teacher Margaret Burns attended a Bronaugh academic competition in 1974, she asked the shop teacher to build two wooden buzzer boxes with lock-out systems, which were used by Lockwood teams for the next 30-plus years.

She and Larry were instrumental in elevating the quality of academic team competition in Southwest Missouri and later across the state. The Lockwood Scholar’s Bowl tournament, started in 1977, was one of the premier events in the area and, in 1993, they developed the Mind Games, one of the largest tournaments extending across two sites and a week of nightly games. Her teams were successful, filling trophy cabinets with more than one-thousand victories.

In 1985, she helped the Midwest Conference organize a scholar’s bowl tournament, drafting the original by-laws. And in 1988, Larry and Melinda started the L&M Question Service, providing sets of well-written and properly-researched questions for other tournaments.

She was a founding member of Missouri Academic Teachers Association about 1990, receiving the Carol Farmer’s Founder’s Award in 1997 and serving as the statewide president in 2000. When the Missouri State High School Activities Association took responsibility for academic competitions in the early 1990s, Melinda was active in its development, serving on the advisory committee for several years.

Melinda and Larry were selected as Grand Marshals in the 2015 September Days parade, receiving the Optimist Club’s first Influential Citizens of Lockwood award. And they celebrated their 50th anniversary in January 2017, just before Larry died of brain cancer.

She grew up in the Methodist church, but was active at First Baptist Church in Lockwood, teaching upper-elementary Sunday School and Vacation Bible School classes and also serving as Sunday School superintendent 15 years. Later, she enjoyed the fellowship of the women in her adult Sunday School class.

Melinda looked forward to the flowers Larry planted in their well-known garden and she cared for several cats, including Lady Jane Grey and Earl Grey. She enjoyed cooking, canning, reading, playing solitaire and taking care of others.

She was part of the Lockwood Women’s Bowling Association for nearly 25 years, was a long-time leader of the Lockwood Learners 4-H Club, and was bookkeeper for many years for the summer and high school softball teams.

Donations requested to plant a tree in remembrance of both Dixons or to the Shelley Sparks Memorial Academic Team Scholarship at Lockwood High School.

Graveside services were held at 11 a.m. on Tuesday, August 3, 2021, in Lockwood Cemetery. The family received friends on Monday from 4 to 7 p.m. at the Lockwood First Baptist Church.
Online condolences may be shared at www.greenfieldfuneralchapel.com. Services were under the care of Lockwood Funeral Chapel.