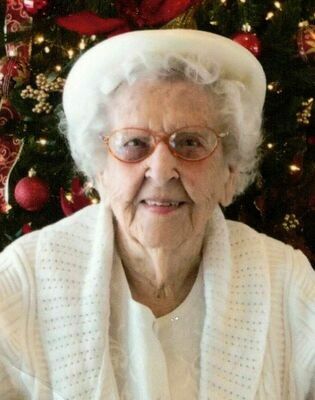 Edra Hazel (Glenn) Eisert, of Greenfield, Missouri, departed this life on Thursday, July 22, 2021, in the Dade County Nursing Home at the age of 107.

She was born on October 5, 1913 in Dade County, Missouri, to Charles Franklin and Ada Catherine (Hall) Glenn.

Edra attended the Arcola School and excelled in basketball. She graduated from Greenfield High School in 1931.

Edra was united in marriage to Eugene Field Eisert in 1938. She was raised and lived most of her life in Glenn Town. Edra was wonderful homemaker and worked hard on their family farm. She was a Vedette contributor writing the Union Chapel items for many years. Edra was a member of the Greenfield First Baptist Church.

Preceding her in death were her parents, Charles and Ada Glenn; her husband, Eugene Eisert; her infant son, Glen Eugene Eisert; two brothers, Carl Glenn and Virgil Glenn; and one nephew, Eddie Glenn.

Funeral services were held at 2 p.m. Wednesday, July 28, 2021, in Greenfield Funeral Chapel. Burial followed in Vaughn Cemetery. The family received friends on Wednesday at 1 p.m. until service time in the funeral chapel.
Memorial contributions can be made to the Vaughn Cemetery or to the Dade County Nursing Home.
Online condolences may be shared at www.greenfieldfuneralchapel.com. Services were under the care of Greenfield Funeral Chapel.