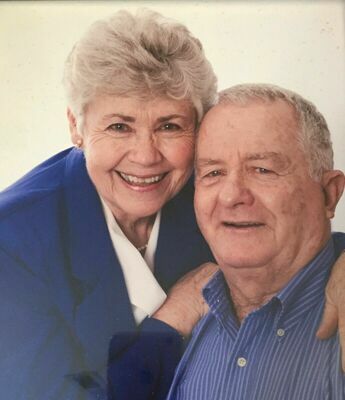 James (Jim) Sheldon Meisenheimer, 84, Greenfield, Missouri, is now at home with the Lord and reunited with his wife, Carol, as of Sunday morning, July 18, 2021. He died of congestive heart failure.

Born September 10, 1936 to Don and Martha Meisenheimer in Great Bend, Kansas, he was the second of nine children and the most ornery of the bunch.

Jim dropped out of high school and joined the Air Force in January 1955 and earned his GED while stationed in the cold tunnels of an Air Force base at Goose Bay, Labrador.
While on leave in 1958, he reconnected with Carol, his high school sweetheart, at their former high school’s football game and began dating in earnest. They married the following March and were happily married for 59 years until Carol died on August 16, 2018 of breast cancer.

Jim and Carol had two children: a daughter, Natalie, and a son, Steven.
Jim held various jobs when first married, one of which was as a patrolman in Hutchinson, Kansas. Later, he moved his family to Phoenix, Arizona in 1968 and worked as a foreman for Arizona Public Service, building large transmission lines across the Arizona deserts and mountains for 22 years.
After retiring, Jim and Carol moved to Greenfield, Missouri, in 1996 and spent their retirement years remodeling their two-story farmhouse. They’ve been members of Stockton Assembly and Glad Tidings Assembly. In addition, they were active in the American Legion in Lockwood, Missouri.
After Carol died, Jim moved to Strafford, Missouri, to live with his daughter for the next two years then the Montclair Senior Living apartment complex for the last year of his life. The staff at the Montclair and his daughter attentively cared for him.
He spent his days watching westerns, attending church, and listening to country western music. Fried chicken, biscuits and gravy and a good cup of coffee were his favorite joys at Ziggie’s Café. Flora, his favorite waitress, cheerfully supplied the food and conversation.
Jim is survived by his daughter, Natalie Savage and her husband, Jerry and their three daughters: Danielle and her husband, Tyler Hobbs; Andrea and Christina. He is also survived by his son, Steven Meisenheimer and his wife, Liz and their three daughters: Stephanie and husband, Chris and their daughter, Freda; Abigail and her husband, Ryan; and Lauren. Yes, you counted that right, Jim and Carol had six granddaughters!