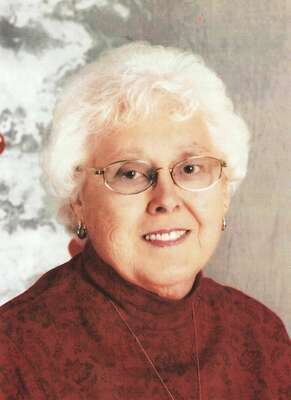 Graveside services will be held at 2 p.m. on Saturday, January 30, 2021 at Dudenville Cemetery, Dudenville, Missouri. Friends may stop by Greenfield Funeral Chapel to sign the guestbook and pay their respects from 2. to 6 p.m. on Friday, January 29, 2021.
The family requests that memorials be made to Good Shepherd Nursing Home in Lockwood or Dade County Genealogical Society. An online guest book is available at www.greenfieldfuneralchapel.com.

Born December 30, 1933 in Mimico, Ontario, Canada, Betty was the daughter of the late John Douglas Thornton and Alice Mabel Calhoun Thornton. She was raised in Oakville, Ontario, Canada.
After graduating from High School, Betty attended St. Joseph’s Hospital School of Nursing, graduating in 1955. She then attended Margaret Hague Maternity Hospital in New Jersey earning a specialty in Maternal Health.
On August 22, 1959, Betty married Delmas Nelson and came to the United States. Betty spent most of her life living on the family farm near Golden City. Her nursing career was spent serving residents of local communities as a nurse at Barton County Memorial Hospital, Lamar, Missouri; as a Dade County Public Health Nurse and the RN administrator at Sac Osage Home Health Agency in Eldorado Springs, Missouri.

Betty was active in many service and leadership activities. These included serving as a member of Lockwood School Board, Business and Professional Women’s Club, Dade County Genealogical Society, and Good Shepherd Nursing Home Board.
In her free time, she enjoyed quilting, sewing, crocheting hundreds of hats a year for children, making stained glass, gardening, letter writing and traveling with her family. No obituary will ever be able to capture Betty’s strong, determined and resilient spirit. She truly believed she could do anything she put her mind to.

Betty was a friend and grandmother to all. She was deeply devoted to her children, grandchildren and her community. She spent countless hours researching the history of the local communities and families and countless hours making quilts for weddings, graduations and just because.

In addition to her parents and husband, she was preceded in death by one sister, Ruth (Thornton) Roberts.