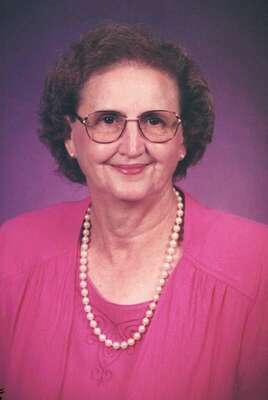 Mildred Irene Stump, of Lockwood, Missouri, departed this life on Friday, January 22, 2021, in the Mt. Vernon Place Care Center at the age of 86.

She was born on April 26, 1934 in Jerico Springs, Missouri, to Levi and Viola Lula (Patton) Bell. Mildred was united in marriage to Harlin A. Stump on February 27, 1981. She worked at O’Sullivan Industries in Lamar, Missouri for 27 years. Mildred was a member of the Lockwood First Baptist Church and the Jasper V.F.W.
She was a wonderful mother and homemaker. Her meals were delicious, and she kept an immaculate house. Mildred was a talented seamstress and quilt maker. She taught wonderful values to live by and she showed by example. We will miss her, but know one day we will be reunited with her.

Graveside services will be held at 10:30 a.m. on Friday, January 29, 2021, in Lockwood Cemetery. Family and friends are welcome to view and pay their respects on Thursday, January 28, from noon to 5 p.m. in Greenfield Funeral Chapel.
In lieu of flowers, memorial contributions may be made to The Crossing of the Lockwood United Methodist Church. Online condolences may be shared at www.greenfieldfuneralchapel.com. Services were under the care of Greenfield Funeral Chapel.