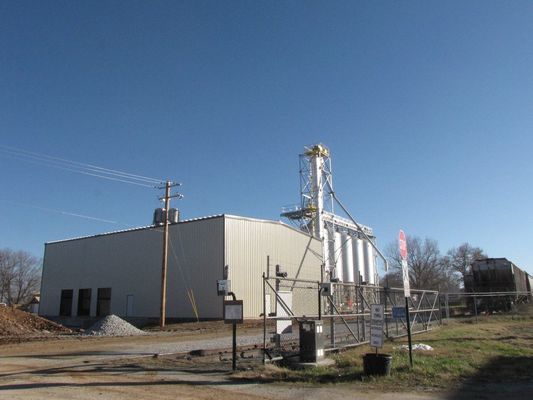 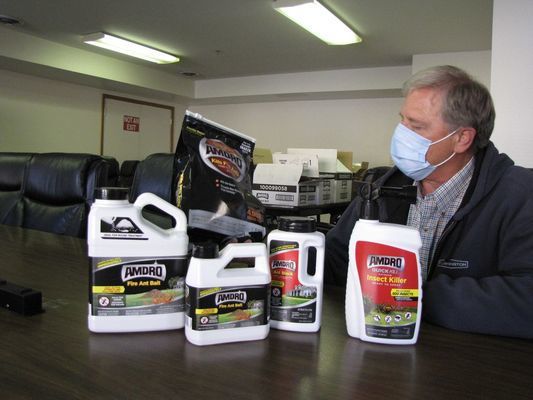 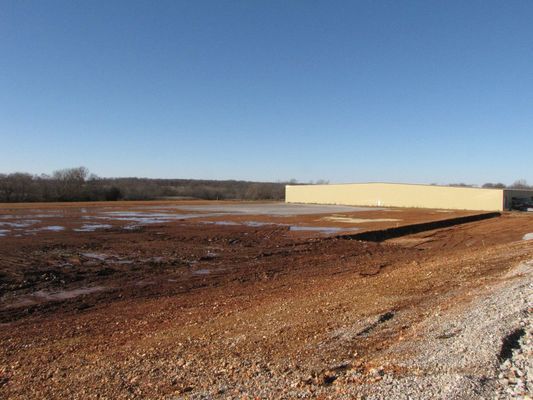 As a high-visibility construction project near Highways Mo. 39/U.S. 160 in Greenfield nears completion, work is just getting started on another at the Pennington Seed processing and manufacturing facility in Greenfield.

General Manager Keith Hankins explained that the storage bins and adjoining production/packaging facility under construction nearest the highway will allow the company the option of bringing in-house certain processes that are currently outsourced.

The bins will provide storage for components of the company’s “Lawn Booster” product, including a gypsum-based soil amendment product and another that is a nitrogen carrier. Both are non-volatile substances that pose no risk of explosion under normal atmospheric conditions.

“It’s a coated grass seed with the amendments added into the same bag for use by homeowners,” said Hankins. “Giving us the option to bring this production in-house will allow for more efficient process as well as decreased shipping costs.”

The components stored in the bins will be pneumatically conveyed to the 60x100 ft. production and packaging facility being constructed adjacent, which will add a further product and bagging line to those already at the facility. Hankins said the shell is nearing completion on the facility, but the work on the interior continues.

“The outside and above-ground is pretty well done, now we’re installing all the wiring and controls for the equipment,” said Hankins.

The new facility will require some additional hiring by the company, of both skilled and unskilled labor, including equipment operators and supervisors.

The bins and equipment are also being configured with the goal of bringing another currently outsourced component in-house in the future, if the company opts to go in that direction.

A larger construction project still in the early phases is also underway at the Pennington facility, that will add an entirely different product line to the facility.

For the past 20 years, Pennington has been a subsidiary of a larger company known as Central Garden & Pet. The Pennington Seed company has been central to the “garden” side of the company’s operations as the primary grass seed brand, but it also includes a number of other products and brands, including some that the company pays other firms to manufacture on its behalf.

Now, manufacturing of one of those brands, Amdro – a fire ant and insect killer, is being moved in-house by Central, and the Greenfield Pennington facility was chosen by the company as the location for the new production lines. The additions will including a 180,000 sq. ft. warehouse and 50,000 sq. ft. manufacturing facility.

“The dirt work is almost done now, and buildings should start going up by February or April,” said Hankins.

The Amdro product line is considered to be safe for household use and is available from retailers for sale to the general public – though it is still technically a chemical, it was developed with human safety in mind. The active ingredients are present in minuscule amounts only harmful to humans in large doses, and remaining ingredients are largely inert. Hankins said the carrier component of the powder and granular products is based on corn fiber grit.

The new Amdro facility will include four production lines for the liquid, granular and powder variants of the product, which including laboratory and quality control positions being added, will increase the headcount at the Greenfield facility by up 20 positions. Together with the Lawn Booster expansion, the facility is boosting its headcount by nearly 10 percent.

“Right now, we employ about 300 when we’re going full-tilt,” said Hankins. “These expansions will add another 20-25 positions, of both skilled and unskilled labor.”

The Greenfield facility was opened in 1979 by Pennington Seed, a family company started in Madison, Ga., about 1945. Pennington was acquired by Central Garden & Pet (itself formed as a distributor about 1980) about 20 years ago, and as the company has grown, so to has the Greenfield facility. Hankins said the Greenfield division is one of if not the largest single site manufacturing divisions in the entire enterprise.