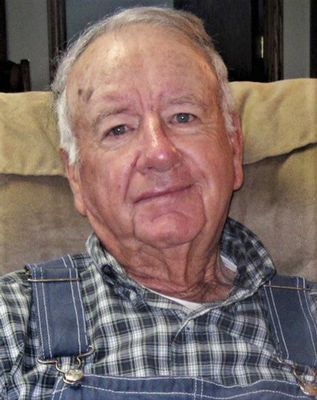 Jackie Lee Thomas, age 89, Golden City, Missouri, unexpectedly passed away on Friday, September 18, 2020, at the Missouri Veterans Home in Mount Vernon, Missouri.
Jackie was born January 15, 1931, on the family farm in Lawrence County, Missouri. He was the son of William “Seth” Thomas and Doris Delberta Wilson Thomas. He lived on the Thomas family farm near Golden City, Missouri throughout his life. He married Eula Mae Pyle on May 17, 1952, at the Red Oak Methodist Church.

Jackie attended elementary school at Coon Creek and was a graduate of Lockwood High School. Jackie achieved the degree of American Farmer from FFA and served as a state officer. He was also a graduate of Missouri State University, formerly Southwest Missouri State University. Jackie took great pride in being a farmer and remained active in managing the farm he operated with his wife, Eula Mae.
He was a patriotic man who loved his country and was proud of his military service. He retired from the United States Army Reserve with the rank of Colonel and was the commanding officer for the 203rd Combat Engineer Battalion. Jackie was a 1974 graduate of the United States Army Command and General Staff College. He was also a member of the American Legion. He was a loyal member of the Democratic Party and enjoyed attending political functions to support Democratic candidates. Jackie was a member of Gray’s Point Christian Church.

Jackie was the family historian and always told the story of how the three Thomas brothers married three of the Pyle sisters on May 17th of different years. He had a strong work ethic and got up early and worked late. He always had time to stop to visit with neighbors and the friends and family who came to the farm to go hunting or fishing.
One of his favorite activities was to have his grandchildren help put out flags at Gray’s Point Cemetery and Red Oak Cemetery on Decoration Day and Memorial Day to honor the veterans for their military service. J

ackie always asked his grandchildren if they had time for a farm tour and would take a drive around the farm while pointing out birds and plants and sharing family history.

Jackie enjoyed playing cards, specifically Pitch, and watching his children and grandchildren participate in sporting events. Jackie will be greatly missed by all who knew him.
Due to the pandemic, a graveside service under the direction of the Fossett-Mosher Funeral Home in Mt. Vernon, will be held at 11 a.m. on Saturday, September 26, 2020, at the Gray’s Point Cemetery in Gray’s Point, Missouri.
The family wishes to thank the staff at the Missouri Veteran’s Home and the Good Shepherd Nursing Home in Lockwood, Missouri for their many acts of kindness.
If desired, memorial contributions may be made to Gray’s Point Cemetery Association or the donor’s choice of charity, in care of the funeral home.