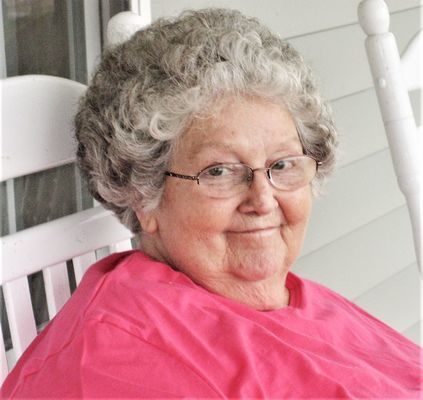 Eula Mae Thomas, age 86, peacefully passed away on Wednesday, September 9, 2020, at Mercy Hospital in Springfield, Missouri. Eula Mae, who was known as “Toots” to her family and friends, was born May 11, 1934, on the family farm in Lawrence County, Missouri, the daughter of Frank Rolla Pyle and Neata May (Gulick) Pyle.

Toots attended school in Red Oak and at Lockwood and was a graduate of Miller High School. She lived on the Pyle family farm near Golden City, Missouri, until her marriage to Jackie Lee Thomas on May 17, 1952, at the Red Oak Methodist Church.
She remained a life-long resident of Lawrence County, Missouri stating she never wanted to move far away from the home and family she loved. She was a devoted wife, mother, grandmother, and great-grandmother. She was a cherished sister, aunt, and friend to all who knew her.
Toots took great pride in being a farmer and remained active in managing the farm she operated with her husband, Jackie. She was a member of Gray’s Point Christian Church.

Toots was preceded in death by her parents, Frank and Neata; five brothers: Earl Eugene Pyle, Harley Lee Pyle, Paul Franklin Pyle, Ancil Leon Pyle, and Howard Dale Pyle; and two sisters, Fern Bernice Wright, and Margaret Cordelia Uber.
Toots loved spending time with her family. For many years, she prepared Sunday dinners to which all were welcome. She enjoyed her many friends from the community and her home was always open to visitors. She was known for her skill in the kitchen, especially her chocolate cake and blackberry cobbler. She also enjoyed playing dominoes, watching her children and grandchildren participate in sporting events and play in the creek, planning Easter egg hunts and following the Kansas City Chiefs.
She was always kind to others and lived her life with dignity, integrity, and a wonderful sense of humor. Toots will be greatly missed by all who knew her.

Due to the pandemic, a graveside service under the direction of the Fossett-Mosher Funeral Home in Mt. Vernon, will be held at 11 a.m. on Saturday, September 12, 2020, at the Gray’s Point Cemetery in Gray’s Point, Missouri.
The family wishes to thank the staff at Good Shepherd Nursing Home in Lockwood, Missouri, for their devotion and many acts of kindness.

If desired, memorial contributions may be made to Gray’s Point Cemetery Association or the donor’s choice of charity in care of the funeral home.

Greenfield Gets Good Report from Auditors