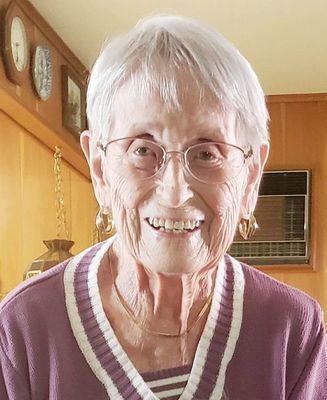 Frances Aileen Hudspeth, 94, of South Greenfield, Missouri, departed this life Tuesday, August 11, 2020 in her home surrounded by her family.

She was born October 16, 1925 in Dade County, Missouri, to Willis and Luella “Dollie” (Sweet) Hembree. She was united in marriage to Bill Waldon Hudspeth on May 3, 1947 in Bolivar, Missouri. Frances was a member of Round Grove Baptist Church and The America Legion Auxiliary.

She graduated from Greenfield High School in 1942 at the age of 16 and immediately started working to help support her family. During World War II, she worked at the Dade County Rationing Office where she earned the nickname “Sugar”. She also worked in the Officers Pay Section of O’Reilly Hospital at Springfield, Missouri, until the war was over. Returning to Greenfield, she worked for a time at Russell Abstract Co. later known as Russell/Bryant Abstract, Real Estate, Insurance. For many years she worked as a secretary in the insurance field, retiring in 1984 from Bryant/Marshall Agency.

Frances and Bill lived in the Pennsboro, Mssouri, community for many years acquiring many life long friends. Later, they wintered in McAllen, Texas, for 18 years making new friends from all over the country. Frances continued going to Texas for four years after Bill passed. She especially enjoyed the music jamborees and playing bingo twice a week.

Graveside services are at 2 p.m. on Friday, August 14, 2020, in Pennsboro Cemetery.
Friends and family are welcome to view and pay their respects on Thursday evening from 5 to 7 p.m. and also Friday morning from 9 a.m. to 12:00 p.m. in Greenfield Funeral Chapel.

Services were under the care of Greenfield Funeral Chapel.