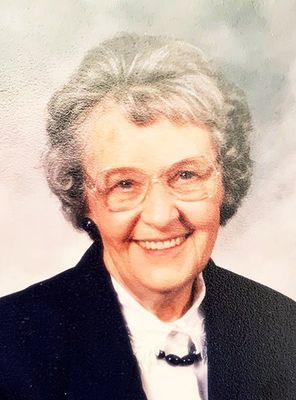 Helen was born in the Aldrich Community in Polk County to Sam and Dora Tygart Rowan on January 9, 1916. She was the youngest of four children. Her siblings, Glen Rowan, Mary Rowan Kirby and Golden Rowan McGill all preceded her in death. Helen’s father died when she was 10 and her mother lived to the age of 93.

Helen married Herbert Rotrock on December 31, 1933. To this union three children were born. Helen and Herbert devoted their lives to their children and their families. They moved to Springfield, Missouri in 1968. Herbert passed away February 2, 1993. Helen lived independently after Herbert’s passing. She demonstrated strength and courage as a widow. She drove until the age of 90. She lived in Springfield, Missouri for 49 years. She moved from Springfield to the Dade County RCF in Greenfield, Missouri in 2017.

Helen was a devout Christian. She was a 50+ member of the Aldrich Methodist Church and was honored as the oldest surviving member of the church. She looked forward to her heavenly home and would often say, “I will go when the good Lord has my room ready.”

Helen was a good seamstress and homemaker. She made quilts and numerous Christmas tree skirts and stockings for the family. She enjoyed embroidery work and played piano. In later years, she enjoyed coloring. Helen was recognized as an excellent cook and enjoyed sharing her special offerings.
Helen and Herbert had six grandchildren and nine great grandchildren. She was called Grandma and GG. They were all a joy to her. She loved for them to stop by and have cookies.

In lieu of flowers memorial contributions can be made to Aldrich Methodist Church, Pleasant Ridge Cemetery, or Dade County Nursing Home and may be left at the funeral home.

Due to COVID-19, there will be no formal visitation however, Helen will lie in state on Friday, August 14, 2020 from noon until 6 p.m. at Wilson-Griffin Funeral Home, Ash Grove. Graveside services will be 1:30 p.m., Saturday, August 15, 2020 at Pleasant Ridge Cemetery, Aldrich, Missouri. The family asks that those in attendance wear masks and have no physical contact with the family.

Helen’s family would like to thank the staff of Dade County Nursing Home and Hospice Care Team for their excellent care.

The following is a link to a Vedette story about Mrs. Rotrock turning 104 earlier this year: https://www.greenfieldvedette.com/articles/2143/view